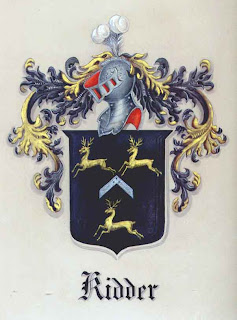 Prior to the Revolutionary War, Colonel Reuben Kidder of New Ipswich, New Hampshire, had what purported to be the arms of the Kidder family carved upon the mantel of his dining room, and also had a coat painted which hung upon the walls of the drawing room of his mansion house. Except for the addition of a carpenter's square, the arms are strikingly similar to those described by Burke as having been granted to the unknown Kidder of Maresfield in the time of Henry VII. These arms cannot be found recorded in the standard works on heraldry.

Colonel Kidder's carved Arms were destroyed during the demolition of his house years after his death, while the painted ones are reported to have consigned to the flames during his lifetime by an irate member of his household who, as an adherent to the Revolutionary cause, regarded them as a Loyalist emblem which she felt she was fully justified in destroying.
Posted by Kidder's in History at 12:55 PM