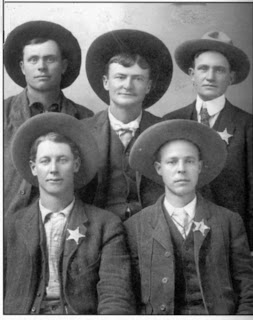 JEFFERSON "Jeff" KIDDER (November 15, 1875 - April 5, 1908)
Three Arizona Rangers have given their lives as a result of their service. Sergeant Jeff Kidder was murdered in Naco, Sonora, near the end of the Territorial Arizona Rangers' era. Ranger Jeff Kidder was hot on the trail of notorious Mexican bandit leader and rustler Efumio Vaquero when their search took them to the town of Naco. He entered Naco, Sonora on April 3, 1908, where due to his authorization he had full arrest powers, and in a small cantina he located his suspects. A gunfight erupted between Kidder and Delores Quias and Tomas Amador, both of whom were Mexican policemen, resulting in both suspects being wounded, with them wounding Kidder. Two Mexican Police, in business with the outlaws, then burst into the cantina firing at Kidder, hitting him in the gut. Kidder, alone and outnumbered, continued the fight, returning fire on the two officers, killing them both. However, Kidder had been badly wounded, the bullet having ripped through his intestines and exiting his back, leaving him laying on the floor.

Tom Rynning, an Arizona Ranger Captain, would later claim that he never saw any man faster with a gun on a quick draw than Jeff Kidder.

Jeff Kidder is profiled in the book "Deadly Dozen", written by author Robert K. DeArment, who indicates that Kidder was one of the twelve most underrated gunmen of the Old West.

Jeff Kidder was the son of Silas Wright KIDDER and Ada CAMPBELL.
Posted by Kidder's in History at 5:19 AM