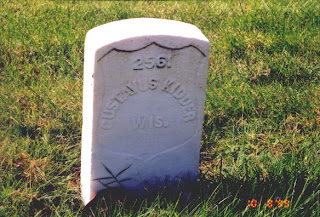 Gustavus KIDDER enlisted in 1864 and served in the 19th Wisconsin Infantry. The regiment was assigned to the Department of Virginia. On Sunday, 9 August 1864, at City Point, VA, near Petersburg, VA, a tremendous explosion rocked City Point, VA, killing 43 soldiers and injuring 126, which also caused vast property damage. One of the soldiers to be killed by that explosion was Gustavus KIDDER, he was struck by a shell to the body. Two Southern Confederates smuggled a small box with explosives inside on board a Union transport ship, docked at the harbor. When the explosive went off just before noon, General Ulysses S. GRANT sitting in front of his tent was showered with debris but was uninjured. Gustavus Kidder is buried at the City Point National Cemetery, VA, section E, division 1, and grave number 81.

Gustavus KIDDER married Esther HOLLENBECK, they had five children.
Posted by Kidder's in History at 5:34 AM