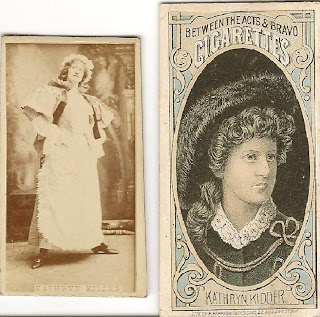 KATHRYN COURTNEY KIDDER, born at Newark, NJ 23 Dec. 1869. She studied dramatic art in New York, London, and Paris, and under her maiden name of Kathryn Kidder. She made her debut in Chicago in 1885 as Lucy Fairweather in Mayo's "The Streets of New York" and later took leading parts in the "Davy Crockett," in "Little Lord Fontleroy," "Held by the Enemy," and many other popular plays, and the leading roles in various companies producing French romantic dramas and Shakespearean tragedies. Since 1904 she was starred in comedies of Old England and in many of the more popular of the plays of Shakespeare and other dramatists.