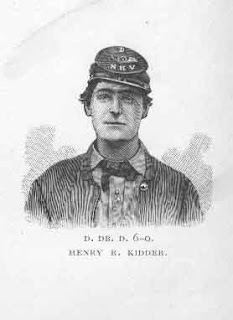 HENRY KENDALL KIDDER at twenty-one years of age enlisted at Concord, NH, 12 August 1862, in the 12th New Hampshire Infantry, Company D, during the Civil War. Henry KIDDER was “Killed in Action”, at the Battle of Chancellorsville, VA, on Sunday, 3 May 1863. His brother Uriah Hill KIDDER, same regiment and company was at his side when he received a wound in the head, which killed him instantly. Henry Kendall KIDDER was lying on the ground just before advancing into battle when Henry KIDDER raised his head to get a better view of the field, he was fatally struck. He was among the 1,606 Union men killed in action at the Battle of Chancellorsville, VA.
He gave the following at induction height six feet, dark complexion, brown hair, brown eyes, and occupation blacksmith.
His parents were Joseph KIDDER and Dorcas NELSON.
Posted by Kidder's in History at 7:36 AM